Nelson was first a professor of religion at Howard before becoming the first black president of Dillard and Shaw universities. An ordained minister, he returned to Howard in the 1940s and finished his career there, serving as dean and vice president.

A first lieutenant in World War I, Nelson was a proponent of non-violence. He traveled to India to help bring together Moslem and Hindu communities. While there, he traveled with Mahatma Gandhi. In the 1960s, he marched with Martin Luther King Jr. Nelson also wrote several books and papers on non-violent resistance. He died in 1977. 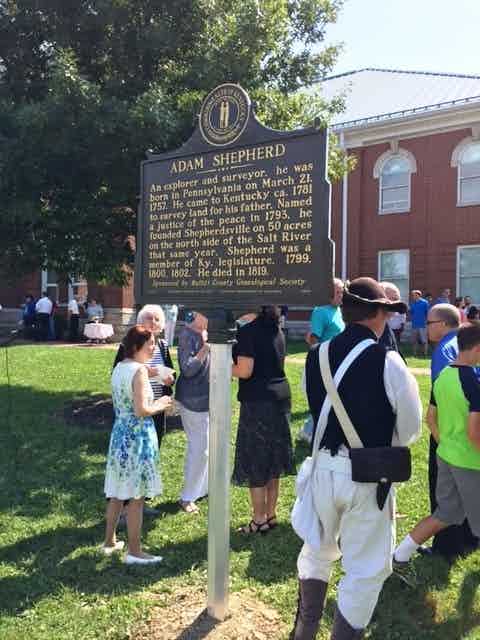 On Aug. 5, KHS unveiled a marker that tells the story of Shepherdsville founder Adam Shepherd.

An explorer and surveyor, Shepherd was born in Pennsylvania in 1757, the son of Peter Schaeffer, a successful grist mill operator. (The family later Anglicized their name to Shepherd.)

Shepherd traveled to Kentucky around 1781 to survey and claim land for his father. He became a justice of the peace in 1793 and later that year founded Shepherdsville, located on 50 acres on the north side of the Salt River. He served as a member of the Kentucky legislature in 1799, 1800 and 1802. Shepherd died in 1819.

More than 2,400 historical markers statewide tell Kentucky’s history. More information about the marker application process, a database of markers and their text as well as the Explore Kentucky History app, a virtual tour of markers by theme is available. KHS administers the Kentucky Historical Marker Program in cooperation with the Kentucky Transportation Cabinet.