KHS started the Civil War Governors of Kentucky Digital Documentary Edition (CWGK) over a decade ago to provide Kentuckians, educators, and scholars with an intimate look at the state’s wartime experience. At the project’s heart are the lives and experiences of ordinary Kentuckians engulfed by the war, as seen through the papers that crossed the desks of the states three Unionist and two Confederate governors. To highlight those stories, CWGK creates biographies for every person, place, and organization that appears within the edition. Remote graduate students hired with support from the National Historical Publications and Records Commission have played an important part in building those researched biographies. Since 2016, CWGK has hired seventeen such Graduate Research Associates (GRAs) from leading universities to work remotely with KHS building the edition and expanding their skills as historians in a digital age.

In 2021, the GRA cohort included Daniele Celano (University of Virginia), Kevin McPartland (University of Cincinnati), and Rachael Nicholas (West Virginia University). We asked them to reflect on their experience of the past year. Below, we share a few of the stories they found intriguing as well as highlight some of the skills they learned along the way.

The depth of materials on CWGK provides stories and documents that connect to nearly every facet of wartime Kentucky, offering users survey of the state’s experiences and to research stories they find compelling. Celano relished the documents pertaining to fugitives who fled from jail (such as the case of Isaac Hall). Set against the backdrop of the war, these flights from the law, in her words, “highlighted how the onset of war increased the chaos” and uncertainty of Kentucky’s antebellum judicial system, adding context to flesh out the complexity of a state beset with external as well as internal problems throughout the war.

McPartland, on the other hand, found the social and political conflict tied to a Caldwell County murder as a way to reframe his understanding of Southern to neighborhoods and community. The Wadlington-Cartwright affair, discussed in over 100 documents on CWGK, revealed deeply held animosities between local residents, as thousands of individuals signed petitions for or against Thomas Wadlington’s execution. The sheer scope of documents helped McPartland explore social, economic, and kinship relationships in western Kentucky, challenging conceptions of Southern social and political structures in the state.

Nicholas uncovered the story of Salinda Bennette near the end of her work with CWGK. The forty-one-year-old widower was convicted in 1863 of aiding and abetting the escape an enslaved boy and girl by buying them a train ticket. Authorities claimed that the enslaved boy had half of Bennette’s train ticket (#216) in his pocket. Bennette protested her three-year sentence in the penitentiary, claiming that the boy was actually a free person and that she had purchased ticket #218. Nevertheless, the court quickly sentenced Bennette to three years in jail. Nicholas noted that such a quick conviction “speaks to the fears Kentucky slaveholders had about the changing social and political landscape” of the state brought on by the process of emancipation.

The GRA program, however, is about more than the work that the students do for KHS, it also works to help prepare future generations of digital historians. Celano, McPartland, and Nicholas, all acknowledged how the work of CWGK improved their toolsets as researchers. The focus on building individual biographies and pulling from different sources—whether it was genealogical records, court documents, or military service records—made them experts in researching individual and local history. Moreover, the digital tools and cooperative experience offered them new understandings of how individuals from all backgrounds encountered the Civil War as a lived, personal experience.

Look for more from Celano, McPartland, and Nicholas later this year, as they translate their work with CWGK and their own research in the edition into pieces for the Register of the Kentucky Historical Society. 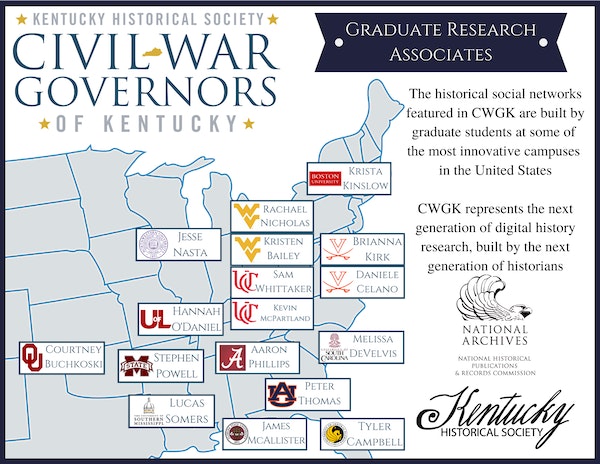 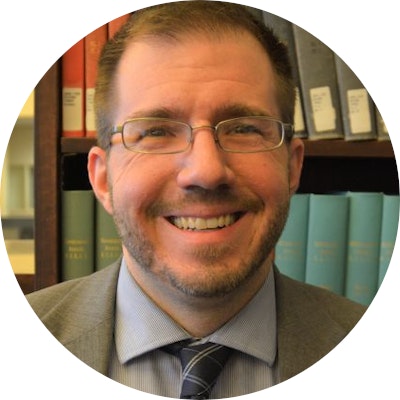 Why? An endless search to understand the past and the decisions made by previous generations led Chuck to a lifelong study of history. From grad school to internships with the Fredericksburg-Spotsylvania National Military Park and Ford’s Theatre Society to the classroom, Chuck has always been asking questions and studying the past. Arriving at KHS to work on the Civil War Governors of Kentucky Digital Documentary Edition (CWGK), Chuck brings a lifetime of curiosity and educational experience. Chuck is a scholar of 19th-century American history and the Civil War Era, with a Ph.D. in history from West Virginia University. He has also worked as a public historian, published an article on loyalty in Civil War West Virginia, “Like a Dark Cloud”: Loyalty, Virtue, and War in Western Virginia, 1861–1863,” and shared his work with students and peers for as long as he can remember. Staff member since 2019.