‘But I don't regret my service to my country’: The Trials of Lt. Robert Buffum 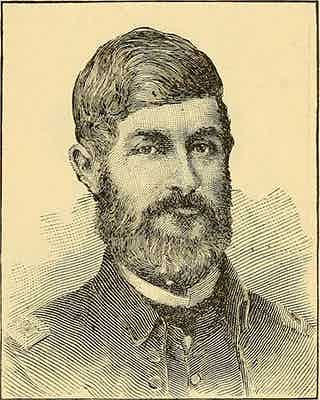 In 1864, the Commonwealth of Kentucky sent a war hero, the third man ever to receive the Medal of Honor, to the state penitentiary. Horrified, Lt. Robert Buffum’s family and his comrades rallied the Lincoln cabinet to secure his pardon.

On his way home from the army, Buffum, a former prisoner of war, had gotten tremendously drunk and broke into a shop in Louisville.

“[W]hen he drinks anything since he has been confined and suffered so much in prison…it makes him perfectly senseless,” his wife explained to the Secretary of War. There was no question of Buffum’s guilt; his pardon hinged on the value of his military service and the just rewards for it. The U.S. Army’s chief justice official, Kentucky Judge Advocate General Joseph Holt, stated the case bluntly.

There were “no mitigating circumstances” except that Buffum was “a soldier capable of such patriotic daring…with a sword at his side and a commission in his pocket.” And so, “His release…would seem to be but a just appreciation of these services.” Relenting to the political pressure, the governor pardoned Buffum.

The war never left Robert Buffum. A year in Confederate prisons after a failed behind-the-lines raid wrecked him emotionally and physically. He drank. He took opium. He repented only to relapse. His family weathered violent mood swings and his inability to hold a job. Buffum sought relief from Congress, appearing personally to argue for a special pension law to cover the suffering he and his comrades endured in prison.

“We believe that our past sufferings and hardships justly entitle us to the consideration of our country, but our families are in a suffering condition, and in want of immediate relief.”

Congress turned down his request. And later that night after leaving a bar, Buffum was mugged. Thieves stole from his chest the solid gold Medal of Honor he had worn to impress the congressmen earlier that day.

Buffum was in and out of trouble with the law. Later, he was in and out of mental institutions. Days after leaving an asylum in 1870, he calmly shot a friend’s father in the head at the dinner table. At his sentencing, Buffum accepted his fate, and opened a window into the invisible wounds that had tormented him since his discharge.

This great and terrible war has fetched me where I now stand. But I don't regret my service to my country. Had I a thousand lives I would give them. I was sent on a military expedition, and was in underground dungeons and in iron cages. … You are familiar, all of you men, with my history. I would say this, however, that I am as innocent as the child unborn, for I knew not what I did. It was a terrible thing to me. … By my service to my country I have been made a pauper, a lunatic and a criminal, and I place myself in the hands of the great Governor of all things, who knows all hearts.

KHS is different from most historical organizations. As an agency of state government, KHS has a responsibility not only to preserve the past like a private group, but also to use the past to better the lives of all Kentuckians. That’s in our mission statement.

Robert Buffum served his government bravely and received his nation’s highest military honor. Then he reached out to it for help when the burden of that service became too much for him to handle. But he received none, and that was a tragedy for him. And his family. And that of his victim.

Buffum’s story raises questions that have, sadly, become more familiar in our own time, though they clearly are not new. The question for us is how to turn his story into a usable one for us today. Almost 10 percent of the Commonwealth’s adult population are veterans. Where were the intervention points that would have diverted a contemporary combat veteran like Buffum from his tragic path? How do we make our institutions and our policies better so that the Robert Buffums in our communities don’t fall through the bureaucratic cracks?