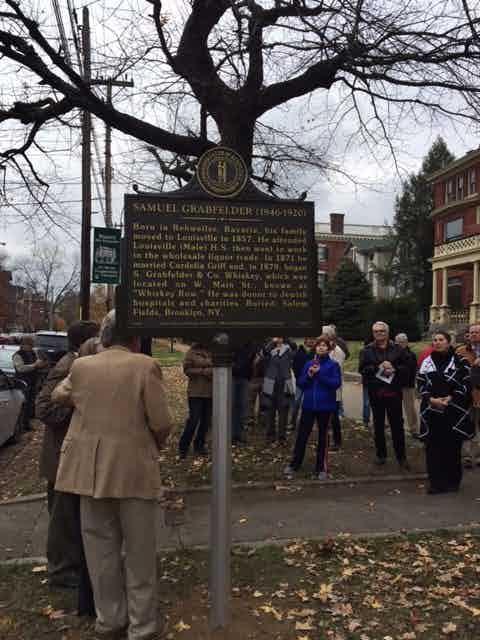 The Kentucky Historical Society (KHS) helped unveil three new historical markers this past weekend. They recognize a German immigrant and distiller and his home, a mill and a home that is listed on the National Register of Historic Places.

The Cedars and Baughman Mills markers were unveiled in Stanford on Dec. 2.

Dr. Thomas Montgomery built his home, The Cedars, in 1853. Montgomery was a well-known physician, farmer and politician. His wife, the former Evaline Whitley, was the niece of Gen. Benjamin Logan, Standord’s founder, and a granddaughter of Col. William Whitley, a Kentucky pioneer and military leader.

The Cedars is a Greek Revival structure. It was one of the early brick house in the area, featured a wired doorbell system and was only the second home in Lincoln County to include a bathroom. A one-story brick dwelling behind the main home originally served as slave quarters. The Cedars was placed on the National Register of Historic Places in 1978. Its marker is at 359 Somerset St.

Baughman Mill, also in Stanford, was completed in 1881 and originally named Lincoln Mills. Until S.H. Baughman purchased it in 1892, the mill struggled to be successful.

Baughman’s brothers, Jim and John, and his brother-in-law, Walter McKinney, joined him to form J.H. Baughman & Co. The mill ground grain into flour, meal and feed for livestock and operated until 1969, when John Baughman Jr., retired.

The mill structure contains logs from Buffalo Mill, Kentucky’s first steam mill, which dates to ca. 1848. Baughman Mill has always been a dominant Stanford figure from its location above Main Street. Its piercing whistle once served as a signal for miles around town, letting workers, farmers and townspeople know it was time for a meal. Its marker is at 201 Mill St.

The Grabfelder-Handley marker was unveiled on Dec. 3 in Louisville.

Samuel Grabfelder moved from Bavaria to Louisville in 1857 as an 11-year-old. He attended Louisville (Male) High School. As a young man, in 1879 he founded S. Grabfelder & Co. Whiskey, located on “Whiskey Row” in downtown Louisville.

Architect William Dodd designed Grabfelder’s Beaux Arts home. It was built it between 1896 and 1900. The home was converted to apartments in the 1950s and renovated back into a single-family home in 1973. Dodd also designed Ferguson Mansion, Louisville Trust and the old Stewart’s Building in Louisville. He moved to Los Angeles in 1912.

Grabfelder died in 1920 and is buried in Salem Fields, Brooklyn, New York. The Grabfelder-Handley marker is at 1442 S. Third St.

More than 2,400 historical markers statewide tell Kentucky’s history. More information about the marker application process and a database of markers and their text is available at history.ky.gov/markers. Also available on the site is the Explore Kentucky History app, a source of supplemental information about marker topics and virtual tours of markers by theme. KHS administers the Kentucky Historical Marker Program in cooperation with the Kentucky Transportation Cabinet.