The ‘Other Side of Creepy’: What the Objects Tell Us

We’ve been having a little fun this month for Halloween. 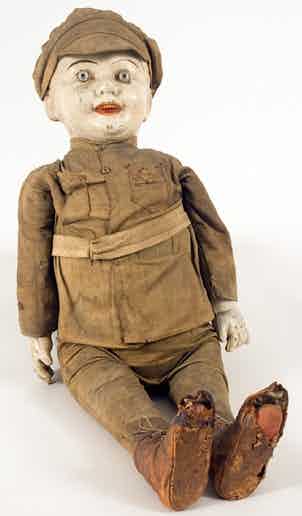 We selected 16 items from our collections, put them into a bracket we called “Creepy Kentucky” and asked people to vote on which item is the creepiest. Some of these items also were on display last week in Creepy Nights at KHS, a special Halloween event.

But on the “other side of creepy,” each item has a story to tell about Kentucky – and that is the reason we have it in our collections.

For instance, Daniel Boone’s plaster skull cast may be “creepy” because someone made it from Boone’s actual skull – two decades after his death. But it speaks volumes about the public’s fascination with the frontiersman. He was their hero, a legend, who captivated their imaginations long after he was gone.

Jimmy the Doll might be creepy to some people because of his fixed look, cracked features and what they consider to be an “unsettling” smile. But from him we learn what dolls were made of 104 years ago; about local fairs, where a little boy won him as a prize; and about one mother who showed her patriotism and honored her three sons serving in World War I by dressing him in a “uniform.”

Not everyone believes in curses, but to people who do, the Conjure Chest is super creepy. The chest, however, can teach us about 19th century woodworking techniques, and its dark legend tells us about the cultural beliefs of the time.

The Kentucky Historical Society has hundreds of thousands of objects, photographs and documents. Researchers today and in the future can add to the historical narrative and gain a better understanding of past times – and of the present – by studying the items we collect. Even those we decided to highlight this month as being “creepy.”

This is for N and C, Graveyard Quilt, from QN blog