The Kentucky Historical Society (KHS) dedicated two new historical markers in November. One, in Jefferson County, marks the Kentucky Soldiers’ Home site. The other, in Paducah, recognizes a Boy Scout troop founded in 1910.

The Kentucky Soldiers’ Home was the only institution in Kentucky established for Union Civil War veterans. Its purpose was to provide a home for those who were aged, infirm and unable to support themselves. J.T. Boyle Post No. 109 of the Grand Army of the Republic proposed the home. It was chartered in 1890 and opened in 1891. 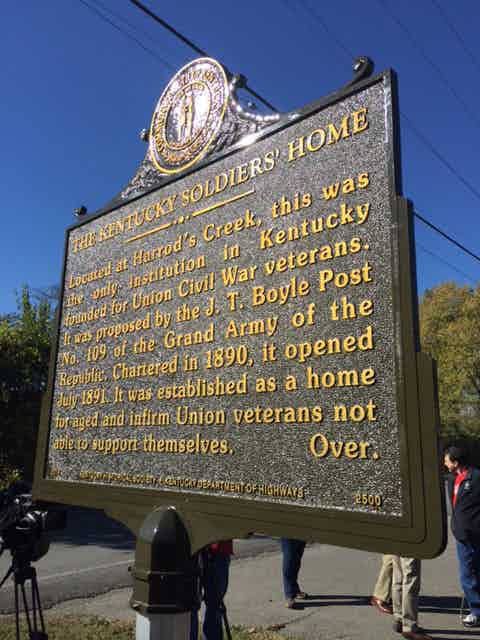 Former Union Gen.Speed S. Fry served as the home’s first superintendent and director. He died in 1892. Catherine E. Hirst of the Ladies’ Aid Society headed the facility until it closed several years later. During its brief time in operation, it housed 35 veterans. Five of them died at the home.

The marker is at 6319 Upper River Road, Harrods Creek.

In 1910, Rev. Clinton S. Quin, rector of Grace Episcopal Church in Paducah, organized Boy Scout Troop 1. The Boy Scouts of America was incorporated on Feb. 8 of that year. Troop 1 is the seventh-oldest troop in the United States. Grace Episcopal Church continues to sponsor the troop, providing meeting facilities and volunteer leadership. The troop is a member of the Lincoln Heritage Council, one of the older local councils serving both urban and rural areas in the nation.

The Boy Scout Troop 1 marker is at 820 Broadway, Paducah.

More than 2,400 historical markers statewide tell Kentucky’s history. More information about the marker application process and a database of markers and their text is available on our markers page. Also available on the site is the Explore Kentucky History app, a source of supplemental information about marker topics and virtual tours of markers by theme. KHS administers the Kentucky Historical Marker Program in cooperation with the Kentucky Transportation Cabinet.