Last month, city officials in Lexington announced that two Confederate statues will be removed from the grounds of the old Fayette County Courthouse. The decision stirred up controversy; newspaper columns and social media feeds quickly became filled with opinions about the decision. One of the statues honors John Hunt Morgan, a Lexington native who became a renowned Confederate cavalryman. In fact, even before the John Hunt Morgan statue was unveiled, there was passionate debate surrounding the monument.

Today, the Kentucky Historical Society’s United Daughters of the Confederacy (UDC) Collection (MS 111) provides insight into this early controversy. This archival collection contains correspondence, bills and records pertaining to monument’s creation. The UDC raised $15,000 to create the bronze memorial to John Hunt Morgan. Dedicated in October 1911, the statue depicts Morgan astride a warhorse.

The dedication ceremony included Morgan’s brother-in-law, Confederate general Basil Duke; children singing Confederate songs “Dixie” and “Bonnie Blue Flag;” and an address by Gov. Augustus E. Willson. Thousands of people attended the unveiling. At least one UDC member may have avoided the crowd that day. Nearly a year before the dedication ceremony, Genevieve Morgan Williams Mulligan wrote a letter resigning “as a member of the General John H. Morgan Monument State Committee.” In her letter, found in the UDC Collection at KHS, Mulligan said that she was leaving because the statue was a terrible piece of artwork.

She departed “for the reason that the statue selected of Gen. Morgan, as a work of art, in my opinion, is absolutely valueless if not preposterous and is a consummate caricature of a superbly handsome and brilliant man; the story of whose physical perfection and prowess, are no small part of his romantic fame.” Mulligan believed that the statue, as designed by sculptor Pompeo Coppini, “would argue an unintelligent indulgence, not creditable to the educated and enlightened women of this Committee.” Mulligan continued. “In the North,” she wrote, “it has long been charged that the South was always ignorant and uncultured; to continue blindly erecting statues of soul-deadening ugliness, will but serve to confirm the truth of this charge to future generations.

The South is not ignorant; she was never ignorant—it only happens that in her enthusiasm for a cause or an individual she is often betrayed into errors of judgment, as in this instance.” Mulligan then cast aspersions upon other Confederate memorials, noting that, “There are already too many monuments erected to our heroes which only serve to make death terrible and fame loathsome.” She had tried to sway the committee from the statue’s “manifest defects” and “the heedless waste of public funds.” Unable to make a change, she wrote, “I part reluctantly.” In the end, Mulligan did not want a statue that was “merely art for art’s sake.” Instead, she hoped for “art for humanity’s sake.” For her, the depiction of Morgan sitting stiffly on horseback did not meet those expectations.

While modern controversy surrounds the John Hunt Morgan statue in Lexington, the UDC Collection at KHS reveals that some residents were unhappy with the monument even before it was unveiled. 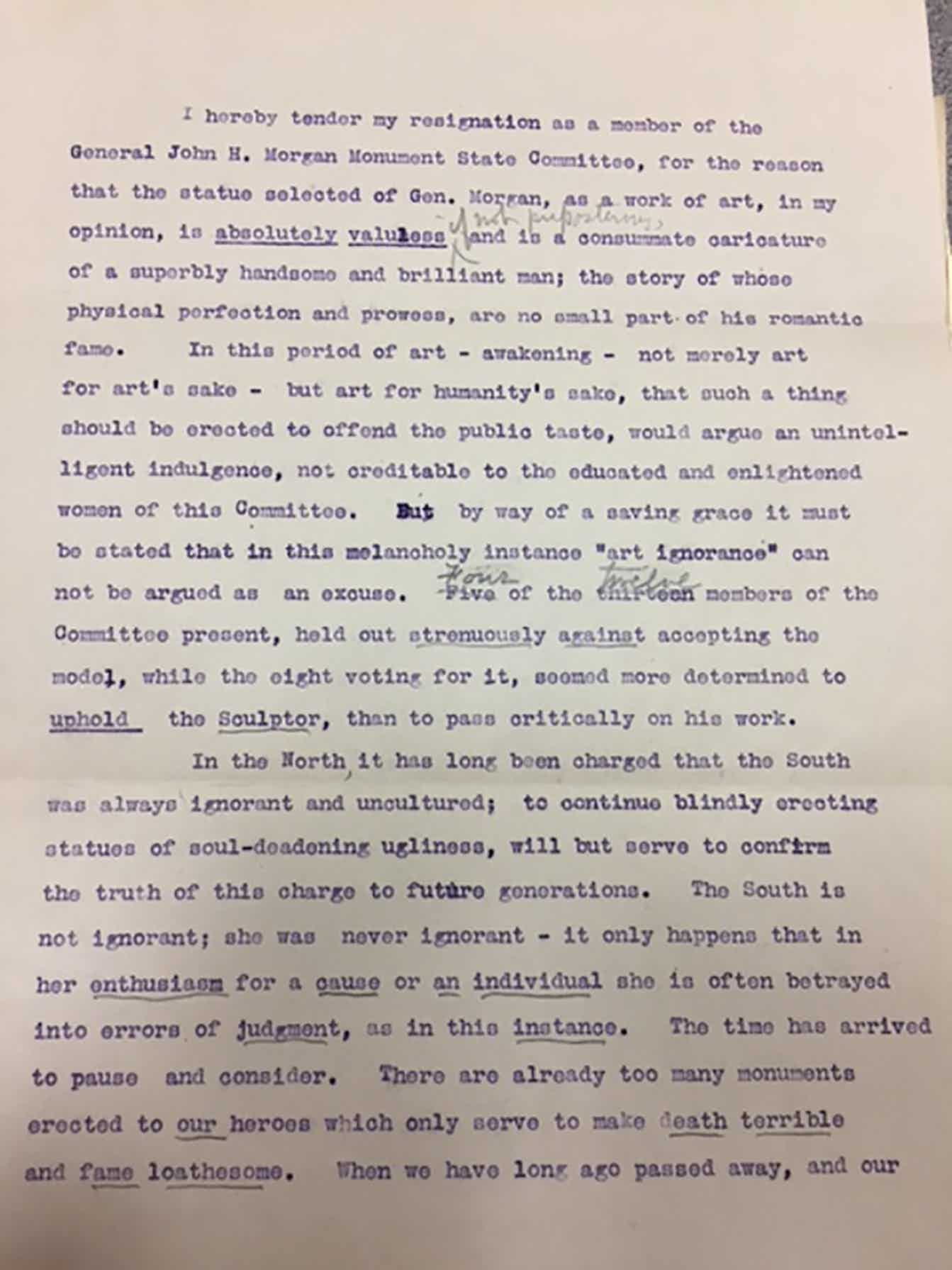