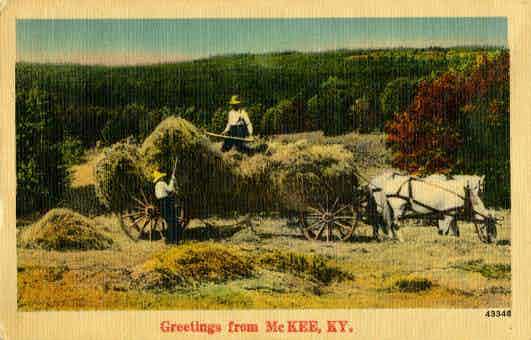 This postcard from the Ronald Morgan Kentucky Postcard Collection at KHS shows a Jackson County farm.

In 1983, the Tobacco Industry and Family Farm Oral History Projects  met at the Seelbach Hotel in Louisville, Kentucky. Sponsored, in part, by the Kentucky Oral History Commission (KOHC), of primary importance was discussion of a pilot project including oral history interviews of farm families from north central Kentucky. Initially envisioned as 25 interviews, the 1983-84 project eventually grew to encompass dozens of interviews with individual women and men ranging from their 30s to their 90s. The project proceeded with a series of interview questions that, combined with topical finding aids, benefits present-day researchers by providing detailed guidance on each interview.

Interviewers went out into the field in 1983-84 with the task of recording family farming practices and documenting rural life in Kentucky. By collecting information on key social, economic, political and agricultural topics, the resulting cumulative effort allows present-day researchers the opportunity to study how a region viewed itself in the past and how perceptions of Kentucky farm and community life have changed over time.

Ben Tussey  of Jackson County, Kentucky, described growing corn for farm use and tobacco as a cash crop on his father’s 300-acre farm in the 1930s. Regarding tobacco, Tussey told an interviewer in the early 1980s that during the Great Depression, “we sold it for a quarter a pound.” Also of Jackson County, Nora Gilbert recalled farm food production while similarly stressing the theme of rural self-sufficiency. She informed the interviewer how the family grew and “canned everything we could.”

Oral history offers a unique method of understanding how Americans in the past identified themselves as well as how they engaged with the changing world around them. The Kentucky Historical Society’s (KHS) Family Farms Oral History Project offers academic researchers, genealogists and persons interested in rural life a unique window into Kentucky’s past.

The collection has particular strengths in discussion of gender roles on the farm, farm food production, farm ownership, tenancy and sharecropping, African American farming experiences, tobacco production, changing technologies and agricultural methods, the introduction of conservation methods including no-till agriculture as well as pesticides and herbicides. Many interviews also conclude with recommendations for young farmers faced with the challenges of agricultural production during the 1980’s farm crisis.

Access to the collection has increased over time with the advent of digitization. The histories are housed at KHS with many interviews and transcripts available through the digital catalog. By digitizing oral history collections, organizations such as KHS provide the opportunity for listeners to immerse themselves in these snapshots of farm life. The interviews are available for any person with an interest in Kentucky history and regional rural life in the early- to mid-20th century. Such a collection exists because of the foresight of institutions such as KOHC and KHS, and citizens of the state who recognized the value in collecting for future generations the stories, experiences, and insights of the past.

Dale Potts is an assistant professor of history at South Dakota State University, where he teaches courses in United States social and cultural history, Native American history and environmental history. He is a recipient of a Kentucky Historical Society short-term fellowship and will contribute an article to an upcoming issue of the Register of the Kentucky Historical Society.

KOHC, the only state agency committed to statewide oral history documentation through granting programs and outreach, commemorates its 40th year in 2016. KHS administers and houses KOHC.