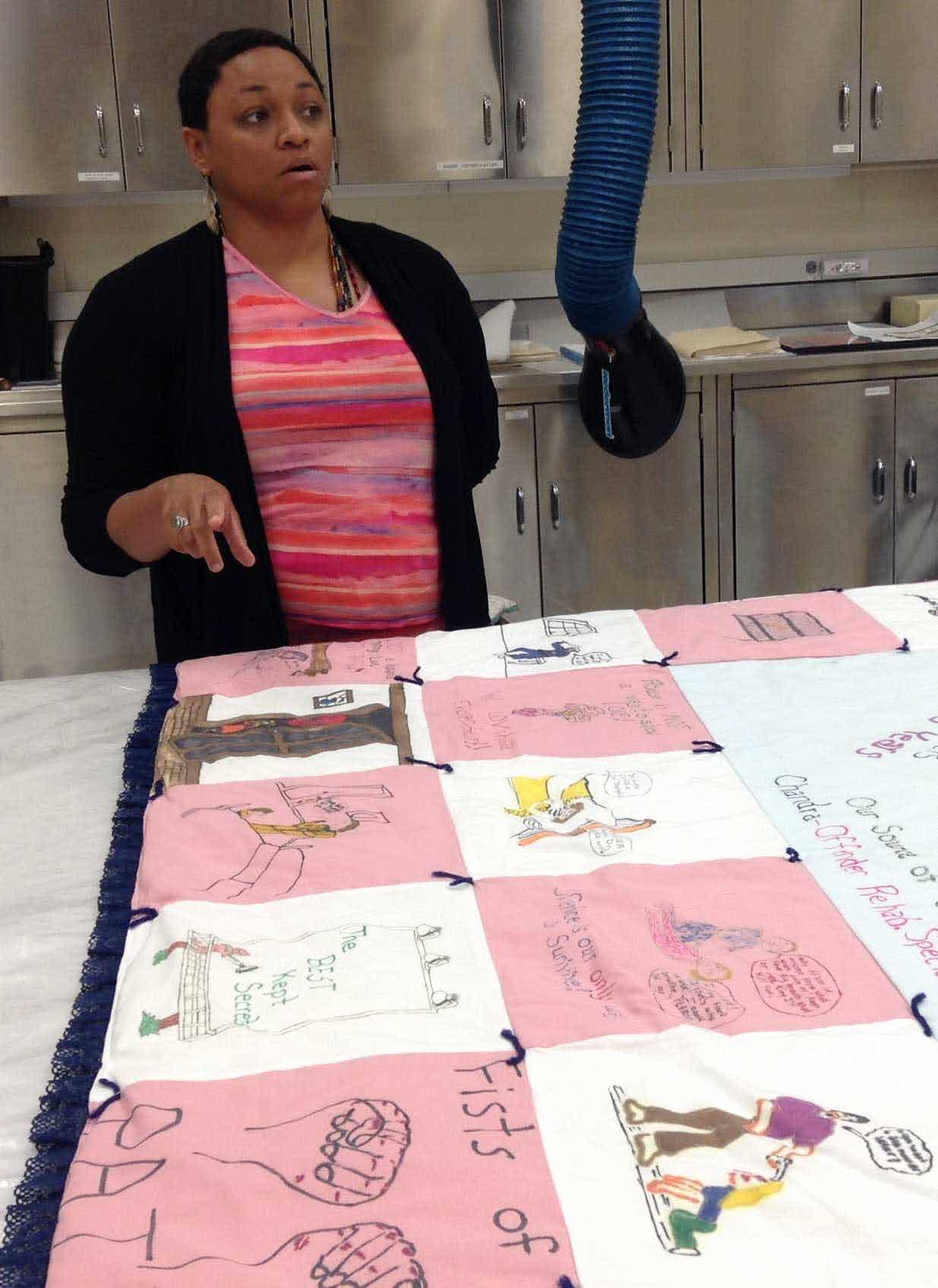 On a visit to the Kentucky Historical Society, Charlene Brown looks at a quilt women in the Battered Offenders Self-Help group made.

Everything, including family violence, has a history. October was National Domestic Violence Awareness Month, and it’s even more fitting that you’re reading this after the month has passed. Community organizations don purple ribbons during the month to raise greater awareness about domestic violence, but activist-warriors work year round to educate the masses about this crucial issue and provide care and assistance to surviving families; and survivors diligently devote themselves to healing, a process that lingers through the years.

As a historian and domestic violence survivor, I must share with you this movement. The domestic violence movement is only about 40 years old. Women’s liberation activism drew substantial attention to domestic violence in the mid-1970s. The first “battered women’s shelter” opened in St. Paul, Minnesota in 1974, and 10 years later Congress passed the Family Violence Prevention Services Act, recognizing violence against women as a systemic issue and providing funding for the creation of domestic violence programs, projects and housing assistance. In the 21st century, the fight marches on. Activists have worked diligently and made incredible strides in these short 30 years. Yet, domestic violence was not new in the mid-20th century.

In 1891, Lila White, a 16-year old domestic, was arrested for poisoning her family with arsenic. The story came as a shock to Lexingtonians, who knew the White family as a respectable, church-going family. Lila, the daughter of Peter White, a local coachman, was not your typical teenager; she worked as a live-out domestic in the home of the Fayette County comptroller, and, over time, spent long hours in her employer’s home learning to read and write, avoiding life in her home. Newspaper accounts document Lila’s reports of emotional and physical abuse at the hands of her stepmother, but it was a severe beating by her father and stepmother for attending the church of her choice that led to the fateful poisoning.

In an act of revenge, Lila emptied a vial of arsenic into the family’s coffee grounds. Four family members ingested the tainted brew, but only two perished: Lila's aunt and uncle. Lila was sentenced to 15 years in the Frankfort Penitentiary for manslaughter, where she met Fannie Keys Harvey, another woman incarcerated for resisting emotional abuse in the home. Lila, released from prison in 1901, returned to her father’s home. Census records indicate her stepmother died prior to Lila’s release. The family retained its respectable reputation, but it appears Lila’s abuse continued. Despite membership in a middle-class family, she was admitted to Eastern State Hospital in 1915, owning only the tattered, dirty clothes on her back when her father turned her over to the state at the age of 34. She died alone, in Eastern State, in 1917.

Lila’s story is much older than the domestic violence movement. She did not have access to the resources available today and her story reminds us that family violence isn’t always confined to marital relationships. It also gives historians new perspectives of identifying and examining survivors’ stories in the archive. Lila White’s story is one among countless others who have experienced family violence, but whose stories have been overlooked or unexamined to date. These voices are significant – significant in revealing how survivors established agency – and encourage historians to reconsider concepts such as gender, kinship, violence and resistance. More importantly, these stories remind us that family violence has lurked in the most unexpected of places and takes on many forms. These stories should encourage us to take a critical look at how we define family violence, how we work to eradicate it in our communities and how we foster healing environments and awareness of family violence past and present. These stories raise awareness and foster healing beyond the designated month of October.

So, Lila White and Fannie Keys Harvey, this is for you.  I’m telling your stories to spark your healing. This October and every month after.

(Editors’ Note: Charlene Fletcher-Brown is a doctoral candidate at Indiana University-Bloomington, an editorial assistant for the American Historical Review and a KHS research fellow. At KHS, she is using census, school and prison records to reconstruct the lives of Lila White and Fannie Keys Harvey.)