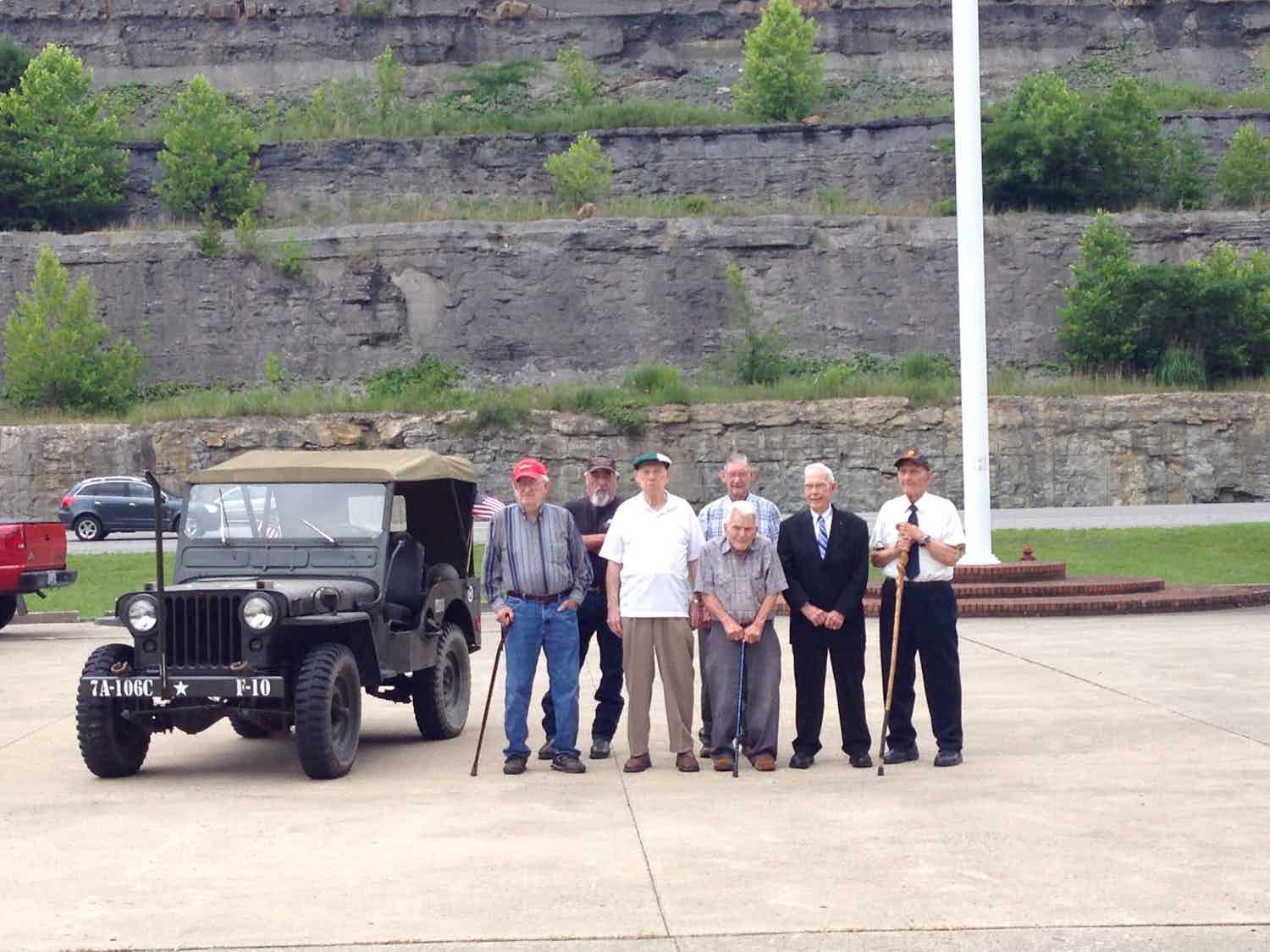 Veterans who took part in the oral history project.

The set-up was the same for every interview. The video camera, carefully positioned to capture the perfect angle, sat to one side of the interviewer. The lights, diligently scrutinized for their ability to illuminate the subject’s face, were bright. The paperwork, signed slowly but intentionally, found its way into the master folder for safekeeping. Every time we embarked on another interview for our World War II veteran oral history project, the routine primed us for the conversations that lay ahead. While the preparations were repetitive, they were in sharp contrast to the content of the interviews. Each interview was astonishing, profound, and meaningful, and the stories shared were sometimes unimaginable, often heart wrenching, and always unforgettable.

The project began as a wild idea that percolated out of conversations I had with colleagues at Centre College, located in Danville, Kentucky. With the bicentennial of the college approaching in 2019, we began to brainstorm ways to commemorate Centre’s history. As I planned my course schedule for the 2016-2017 school year, I realized that one of my favorite courses, “America in the World Wars,” was on tap for the spring of 2016.

“Wouldn’t it be great for students to interview World War II veterans who have a connection to Centre?” I thought. It would provide a hands-on learning experience as well as gain valuable primary source information for the bicentennial celebration. As I made plans, Carrie Frey, a librarian at Centre, learned of a grant program through the Kentucky Oral History Commission. She encouraged me to apply, and I realized that, with more financial support, I could expand the project through the summer of 2016. With a team of undergraduate research assistants and funds to travel to veterans with limited mobility, we could increase our subject pool immensely. In the fall of 2015, I was happy to learn that I received a KOHC Project Grant worth $5,000.

When I applied, I estimated that we could interview 50 veterans. Most people scoffed at the number, telling me that we would be lucky to get half that amount. The naysayers reminded me that “there aren’t that many World War II veterans around today” or that “most probably don’t remember what happened 70 years ago.” These assumptions were wrong, and in fact, the response to the project from veterans and their families was astounding. Not only were veterans willing to participate but also their minds were sharp and memories intact.

I planned for two phases of the project. In the first phase, the 25 students enrolled in “America in the World Wars” interviewed veterans as the major research component of the course. I included not only veterans with a connection to Centre but also any living in central Kentucky. With some helpful publicity from the Danville Advocate Messenger and an email blast coordinated by the Alumni Office at Centre College, I amassed the names of 21 veterans.

Training in oral history methods, ethics, and techniques began immediately, and soon the students were compiling an outline of questions and conducting practice interviews. In late February and through the month of March 2016, the 25 students interviewed these 21 World War II veterans. The results were the most meaningful pedagogical moment of my teaching career.

The second phase of the project began in late May 2016, when I selected a team of five undergraduate research assistants to continue to the work. Two of the students had taken the “America in the World Wars” course with me, and the other three were new to the project. Another round of publicity, this time in the Lexington Herald-Leader, brought an even greater response from veterans. It also helped that the Associated Press picked up the story.

Our schedule filled up quickly, and from June to August, we traveled to veterans across Kentucky, from Alexandria to Albany to Prestonsburg. We doubled the total from the spring, adding 42 more veterans. We exceeded every expectation, and to date, we have interviewed 63 veterans from across Kentucky. In the midst of all the interviews, the students transcribed, processed the digital video and audio files, and completed digital history research projects. It was a whirlwind of activity, but it was worth every mile driven, question asked, and transcription written.

I encourage anyone who teaches undergraduates to consider incorporating oral history interviews into their courses. I also offer four lessons that I have learned during this experience.

Rely on institutional support. As part of the grant, I relied on Centre College resources to serve as some of my in-kind matching funds. These resources were essential to undertaking a project of this intensity. I used the expertise of librarians, technology specialists, and finance officers to administer this project. I also benefited from equipment made available to faculty and students by Centre through the Center for Teaching and Learning, including cameras, batteries, tripods, computers, memory cards, and software. Finally, I received server space and office space that was vital to the project.

Oral history takes people. Interviewing as many veterans as we did in a short amount of time depended on personnel, and I relied on undergraduates extensively. Once properly trained, they were the primary interviewers. They took their work seriously, and I was impressed with how professional, responsible, and proficient they were.

A sound grasp of technology is key. I benefited tremendously from the staff of the Center for Teaching and Learning, especially Todd Sheene. As a videographer and film specialist for Centre College, Todd guided us in selecting the best equipment, navigating bit rates and software choices, and setting up the lights and camera to best capture the veterans. His advice and training were instrumental, and I am grateful for all his help.

Oral histories demand your time. The hours we have spent on this project are too many to count. While each interview took roughly an hour, the work that accompanied it was many times more. When I planned the project, I budgeted my time carefully, knowing that I was in-between other scholarship and could devote some of my spring and all of my summer to it. Even then, it still took more time than I anticipated.

As we come to the end of the project, I have a new appreciation for the power of oral history interviews. They provide a richness and complexity that other primary sources often lack. As a pedagogical strategy, they were profound. To hear about D-Day in a classroom is fine, but to see the terror etched on the face of a veteran who lived it is indescribable. I was struck at how easily these 18-year-olds established relationships with these 90-plus-year-old veterans. Each one saw a reflection of the other, perhaps most often when the students realized that these veterans were their age—usually 18 or 19—when they joined the military. These were the best moments, the times when the students recognized themselves in the veterans, and they served as an important reminder of the power of oral history to bridge generations and connect past and present.

My summer research students used the oral history interviews to create fantastic digital history projects that explore particular topics, including the GI Bill, religion, the Greatest Generation idea, and heroism, that emerged about the experiences of these veterans. Their analyses are sharp, and they ask us to consider deeply the service of these men and women during World War II.