Every family has at least one mystery—an intriguing person, a possible connection to someone famous, or maybe even someone infamous. The Kentucky Historical Society (KHS) is excited to launch a new show set to premiere on Kentucky’s major television markets.  Kentucky Ancestors Town Hall will run each month from February to June and features host Renee Shaw.  KHS created the series as another way to tell Kentucky’s story, one family at a time.

What is Kentucky Ancestors Town Hall?

A program centered on genealogy discovery, Kentucky Ancestors Town Hall digs into the roots of Kentucky’s family tree to answer big questions that have eluded families for generations.  By making connections between family folklore and the existing historical record, the KHS team investigates a series of mysteries rooted in Kentucky genealogy and reveals the findings in a live presentation.  From the Civil War and abolition to serial killers and medical malpractice, Shaw reveals the results of the KHS research team with each family, often with a few surprises along the way.

“By delving into these compelling family histories and then sharing our findings, we hope to inspire others to trace their roots,” said Cheri Daniels, Head of Library and Archives at KHS. “These cases offer invaluable teaching moments that give people new tips and techniques for solving their own family mysteries.  They also tell some of Kentucky’s most rich and fascinating stories, and those moments can be really exciting and sometimes very emotional.”

Episode 1 (filmed in 2018)
HARP BROTHERS – Three families seek answers for victims of the infamous Harp Brothers, America’s first serial killers.  From discrepancies in family names to identifying those in the wrong place at the wrong time, the search ends with a surprising twist.
View this episode.

Episode 2 (filmed in 2018)
JOHN DREW – Questions arise about the life of a man from Clover Bottom, Kentucky when conflicting documents uncover evidence of his racial identity.  The story of John Drew reveals several surprises to a family with more questions than answers.

Episode 3 (filmed in 2019)
ALEXANDER BEAUMONT – Descendants are haunted by the question of their ancestor’s legal status prior to the Civil War.  Was Union soldier Alexander Beaumont enslaved by a family in Garrard Family or did he arrive at Camp Nelson a free man?

Episode 4 (filmed in 2019)
GRANVILLE CRAWFORD – One Kentucky family untangles a web of mysteries born from an Ohio County family feud and the shocking court cases that followed.

Episode 5 (filmed in 2018)
JOHN DOTY – Through clues found in a pension application, the Doty family tries to determine the service record of a Confederate soldier rumored to be one of Morgan’s Raiders. 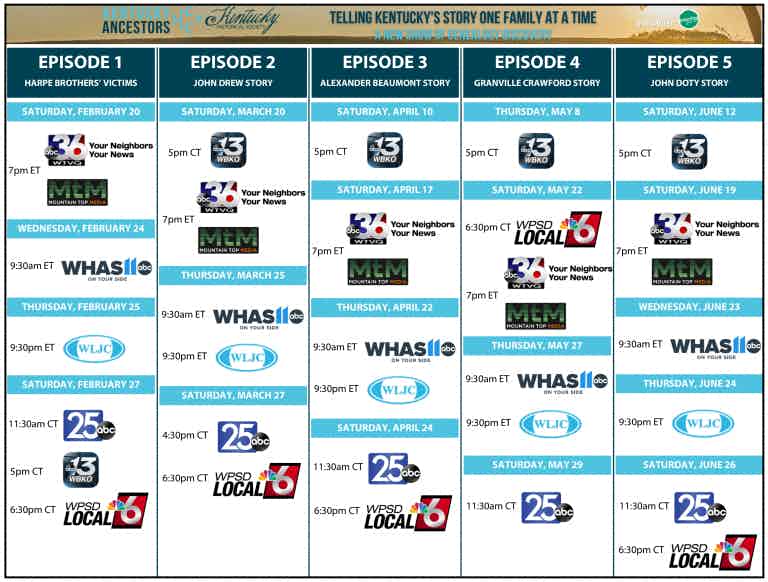 Viewers outside of these station broadcast areas can subscribe to the KHS YouTube channel and receive notification of new monthly episodes of Kentucky Ancestors Town Hall, beginning on March 6th.

Apply To Have Your Story Told

Do you have a family history mystery? Have you hit roadblocks of missing information? Submit your family mystery below, and your story may be selected for research by our experts, and the findings revealed and recorded live before a studio audience.